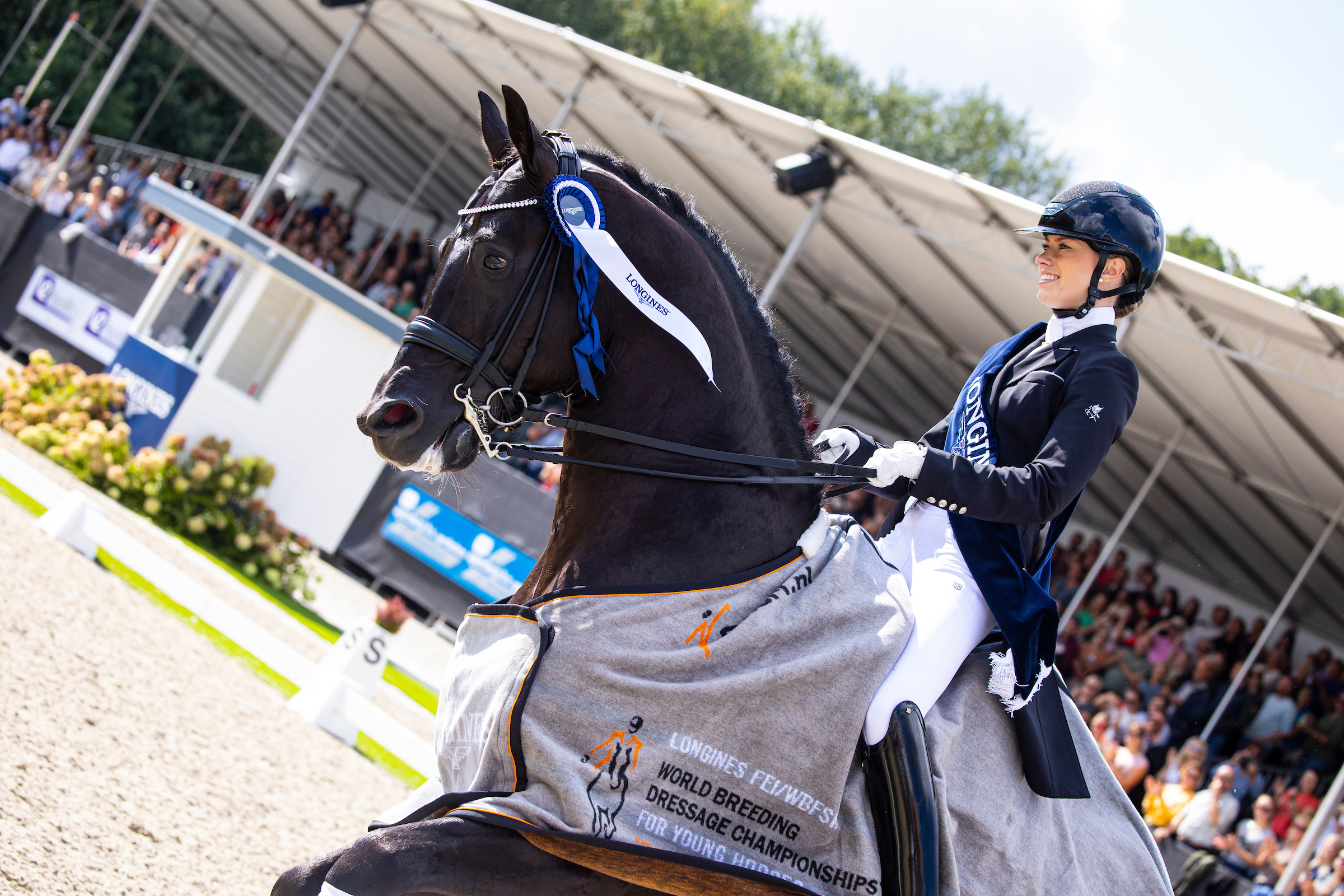 Another Championship title for seven-year-old Kjento

With a big lead, the mighty Kjento (Negro x Jazz) and rider Charlotte Fry just became World Champions in the seven-year-old class during the Longines FEI/WBFSH Dressage World Breeding Championships for Young Horses in Ermelo, The Netherlands. In a sun-drenched final, the expressive KWPN-stallion, bred by A. J. van Os and owned by Van Olst Horses, head and shoulders above the rest of the podium. Silver went to Destello OLD (Dimaggio x Furst Fuegger) and bronze went to Escamillo (Escolar x Rohdiamant).

The jury ran out of superlatives to comment on the trot of the black KWPN-stallion. “What an exciting and well-moving horse”, jury Maria Swenessen from Australia began. “A pleasure to judge, but with a trot with so much balance, upward urge and collection, the question arises: ‘how high can you go?” Only the very highest was enough it turns out: the only 10 in the final was awarded to Kjento’s trot. Kjento’s upward canter with a lot of switching power and an active, tactile pace were also highly appreciated, which was reflected in his score. The fact that the jury has a lot of confidence in the seven-year-old stallion was apparent from the 9.8 for perspective that was awarded, which meant that the World Championship could no longer escape him.

The British Charlotte Fry could not help but shine after the final. “It was so exciting! After my test, there were still four combinations to start. I’ve only been pacing before, but now I’m enjoying the win!” Kjento, who was also the 2021 FEI World Champion in the six-year-old class, is an absolute pleasure to work with, according to his rider: ”Kjento is super chill to handle, in the stable he behaves like a gelding. But as soon as I pick up the reins he’s on and super sharp. He is the perfect horse.” During the test, the combination really enjoyed themselves, despite the pressure to maintain its favorite position after last year’s win. “We went for a more powerfull performance this time around. It surely became everything I hoped for! Of course there is pressure to show that he is still as great as he was last year, but frankly I really don’t have to worry about that with him,” Charlotte concludes.

It could have just happened that ‘silver’ horse Destello would not have appeared at the start of this Championship at all. The participation of the elegant Oldenburg chestnut was a last minute choice and also his debut on this world stage. “I didn’t come to win, just to show his quality. He has little experience in such an environment, so for me he is the winner,” says his rider, the German Beatrice Hoffrogge. And quality the Hanover and Oldenburg approved stallion by Sophi Fabri from the breeding line of Stefanie Löhmann certainly has, with a 9.8 for his trot and 9.5 for perspective. “An expressive and elegant presentation”, Maria Swenessen said after the test. “An elastic trot with a lot of use of the hindleg, but collected at all times and with great ease in the side gaits. The walk was rhythmic with a lot of scope and the canter is great, very uphill. What a beautiful partnership was shown here.”

The imposing and easy moving Escamillo ended up not far behind Destello. The stallions were very evenly matched, with slightly more than eighteenth points difference in score. “I had a hard time today,” Spanish rider Manuel Dominguez Bernal laughs. “Escamillo was hot today, but there is so much quality in that stallion. I am very happy with our third place.” The runner-up in Verden 2021 had a strong test in which his powerful trot with a lot of suppleness stood out. The great work ethic of the Gestüt Tenterhof-bred Rheinlander-stallion, now owned by Kimberley Davis-Slous, was evident throughout the test. “Escamillo has a tactile step with a lot of ease and space, but could show a little more activity in the collected work. The stallion has good use of his hind leg in all gaits and a very strong, upward canter. We are very pleased with his future”, Maria Swenessen summed up after the trial.