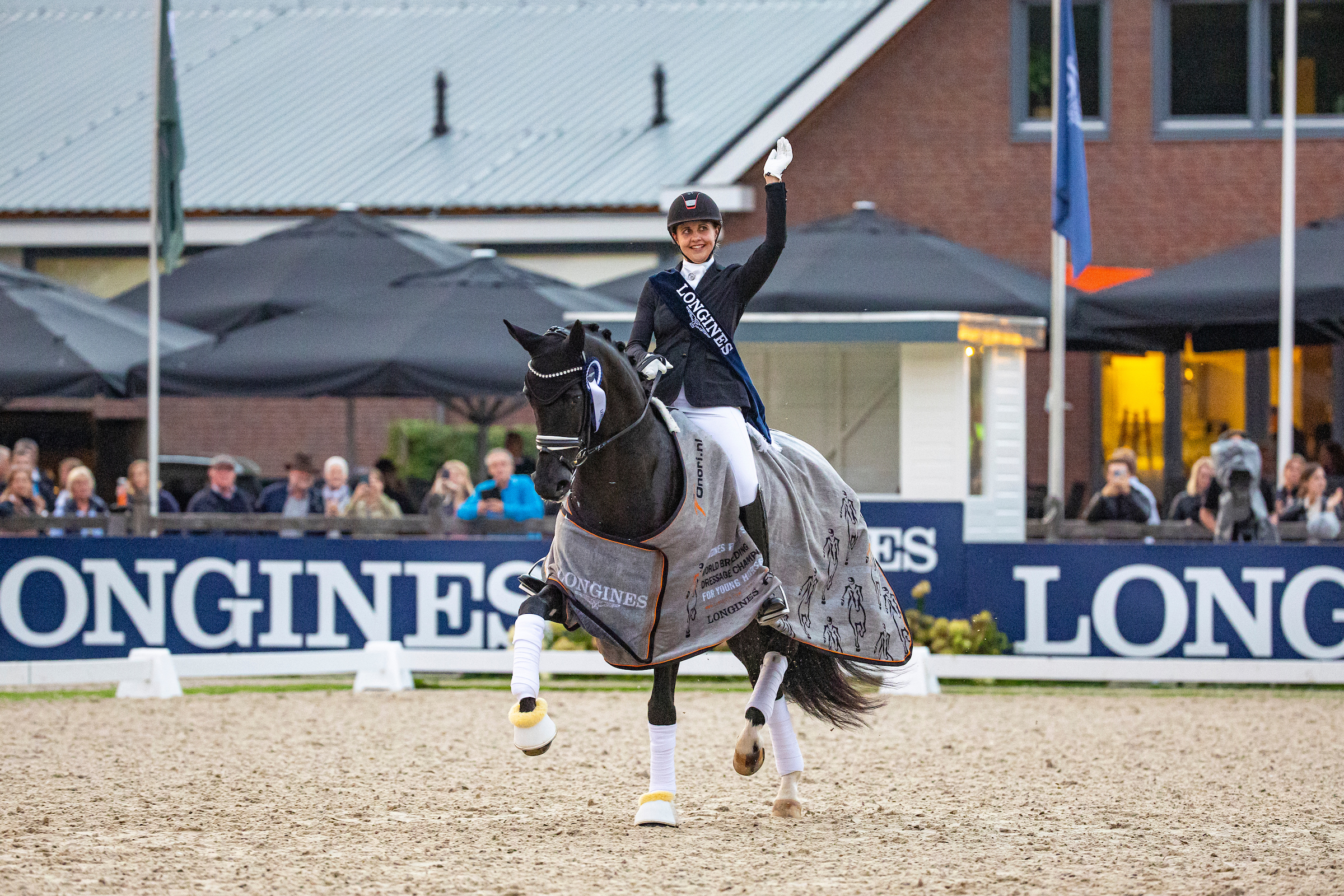 “What an elegant, light-footed mare and what a fantastic hind leg,” said judge Monique Peutz after the test of Lyngbjergs St .Paris and Victoria E. Vallentin. “The whole test was elegant, the trot was light-footed and always with an active hind leg. The canter was very uphill. There were a few small tidbits that could have gone a little better, however we gave this mare a 9.5 for perspective. With her elegance, great hind leg and extremely cooperative character, we think she has a great future ahead of her.”

Vallentin himself could not quite comprehend their victory during the press conference. “When the crowd started cheering on the last line, I thought it might be a good thing. But I never expected this, this is a dream. She’s so easy to ride, I don’t even sweat,” she laughs. It is actually a bit of a fairytale that the Danish rider and her very own mare are living. “I ride a lot of horses, but she is very special to me. I bought her as a two-year-old from a pasture and I have always ridden her myself. We have decided to keep her for a long time. So this victory is really very special.”

Ending in second place was the large-framed Vitalos (Vitalis x De Niro). He was bred by Josef Bramlage and scored a 9.8 for his trot under Leonie Richter. “Vitalos is an extremely powerful and willing horse and Leonie rode a very nice test,” says Monique Peutz. “He always remains nicely uphill, easy moving and keeps moving through his hind end powerfully. He seems to have a lot of talent for the collected work and we think there’s some true future potential in this horse.”

Leonie Richter, the rider of Vitalos, rides the chestnut for the Helgstrand/Schockemöhle stud. “He is great! He was my dream horse from the very first day I started working for Helgstrand. As he is a breeding stallion and he has been very busy last year, but he is such a nice horse and he has the best character you could wish for. He has a lot of power, but at the same time he is so relaxed and focused. And he always gives his everything.”

The Oldenburg stallion Fashion Prinz OLD (Fürst Romancier x Sarkozy), bred by Gestüt Lewitz and owned by Hof Kasselmann, won the qualifying test on Thursday under Frederic Wandres, but had to acknowledge his superiority today in Lyngbjergs St.Paris and Vitalos. Monique Peutz: “This big boy is a fantastic horse. When he develops more power from behind, he’ll only get better. This horse also holds great promise for the future.”

“I am very happy with my horse. He is taller than 1.90m, so he needs a little more time. But I know what he can do. He already made me feel at home. We will prepare him calmly for next year and then we will go for gold!” Wandres reacted.

Henning Lehrmann, the chairman of the jury, was full of praise for the quality of the horses and the riders that appeared on the Ermelo showgrounds. “It was an honor for us to judge such good horses. It was also a great advertisement for horse riding. The riders were all riding positively. I think that dressage is on the right track with these combinations.”

In the final of the Sport Pro Horses Prize, the Hanoverian St. Athletique (Blue Hors St.Schufro x Hofrat) took the win. The black stallion from Hengstenstation Meyerhof was presented by Heiko Klausing from Germany. It was a photo finish, with three horses scoring an average of 8.7.

The class for four-year-old dressage horses was an extra class on the program of the LONGINES FEI/WBFSH Dressage World Breeding Championships for Young Horses. “It was a beautiful section with a lot of quality,” responds Alex van Silfhout, who was responsible for the judging, together with Bart Bax. “The horses were presented very well, moving naturally and neatly in length. When you see how those young horses are already moving around here, it’s almost impressive. They were very obedient in this massive entourage.”

St. Athletique turned out to be the best today. Fully focussed on his rider, the Hanoverian stallion impressed the crowds packed around the arena. “That horse has the complete picture. He showed quality, the test had all the finishing touches you could wish for and the horse moved and behaved very consistent,” says Van Silfhout.

According to the rider of St. Athletique, Heiko Klausing, this is also one of the qualities of the stallion. “He has a great character,” Klausing says proudly. “It is a stallion, only four years old and he is only in his sixth competition: he really does a really good job.”