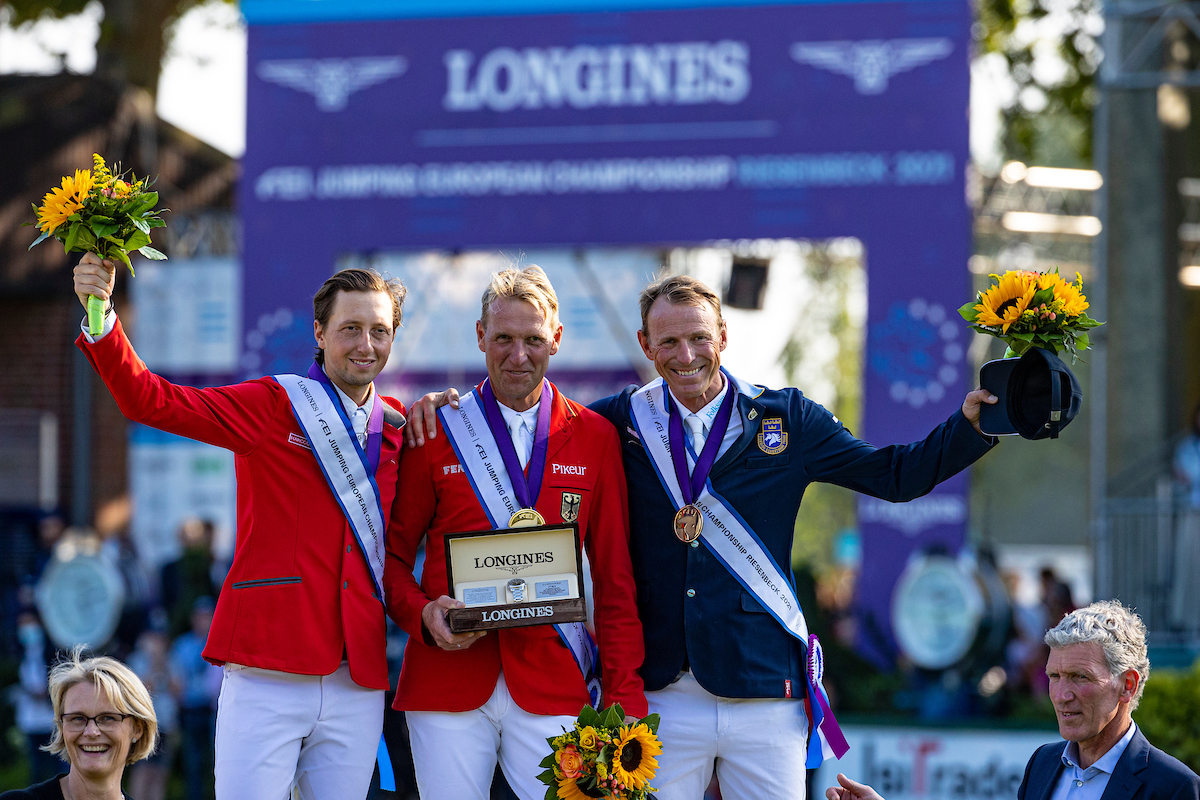 This afternoon, the German rider André Thieme and his DSP Chakaria (Chap 47 x Askari 173) were crowned the 2021 FEI Jumping European Champions after completing the thrilling finale at Riesenbeck International. “I don’t know how many times I can say it, but I feel incredibly blessed with this mare”, a smitten Thieme praises his eleven-year-old chestnut mare, who’s actually related to Simone Blum’s incredibly successful DSP Alice.

“This morning, when I took her out for a bit of flatwork, she felt extra fresh”, Thieme laughed during the press conference. “But, that’s a good sign! The first round today didn’t feel ‘easy’, but it felt… easy enough”, the German explained. “The other competitors made quite a few faults, so knowing when going in I’d be safe even with a fence down, made me all the more confident. Her first three jumps felt good, however when I got the fault early on in the combination, I did get a little worried: there was still quite a long way to go!”

“I tried to stay calm, she stayed calm with me and well: I don’t know how many times I can say it, but I feel incredibly blessed with this mare”, he proudly adds. “She’s very special. Tokyo came a little too early for us: however both her and I learned a lot there. She’s became a different horse and well, in the end I’m really glad it all planned out this way!”, says the freshly crowned European Champion.

The tricky last round of the competition proved to be a major turning point, shaking up the leaderboard quite a bit. The triple combination proved to be especially difficult, with the first element falling down multiple times. “Walking the second course you could see that that triple combination was just going to be very, very difficult for everyone. You had to ride it perfect and even then there was a chance of it going down: the combination of the big, brushy oxer followed by the two tall, delicate verticals was just very tricky”, Thieme answers when asked about the final part of the competition. “The rest of the course wasn’t particularly difficult with lots of loose standing jumps, but still the course was very high, which takes its toll. The course designer, Frank Rothenberger, did an unbelievable job!”

“One day I’ll revenge him”

At only just nine-years-old, the grey Baltic VDL-mare Leone Jei won Swiss rider Martin Fuchs a silver medal. “She was incredible throughout the week”, Martin commented. “I’ve to admit that I was a little disappointed with my two rails down in my rounds. When I made the same mistake as André, I knew that from that moment on I truly had to keep it together to even make it to fourth place. But then, to end with a silver medal is incredible. I was a little disappointed in myself to miss out on the gold, but André was just riding fantastic today. One day I’ll revenge him…”, Martin cheekily laughs.

The bronze medal went to Peder Fredricson and Catch Me Not S, his fifteen-year-old grey gelding out of Cardento 933. When asked about his tactics, he answers: “As my horse has really long strides, my plan was to go in six strides from one to two. He jumps a bit more comfortably that way. However after seeing a few of the other riders, just before I went in I decided to go with seven to keep the horse a little more together going towards the triple combination coming up”, Fredricson explained. “However, that ended up with us clearing the triple, but taking the second jump down. We also took a little too long, adding in a time fault as well. A very expensive one in the end, but well: that’s the sport! The course designer did built that incredibly well!”, the Swede praises.