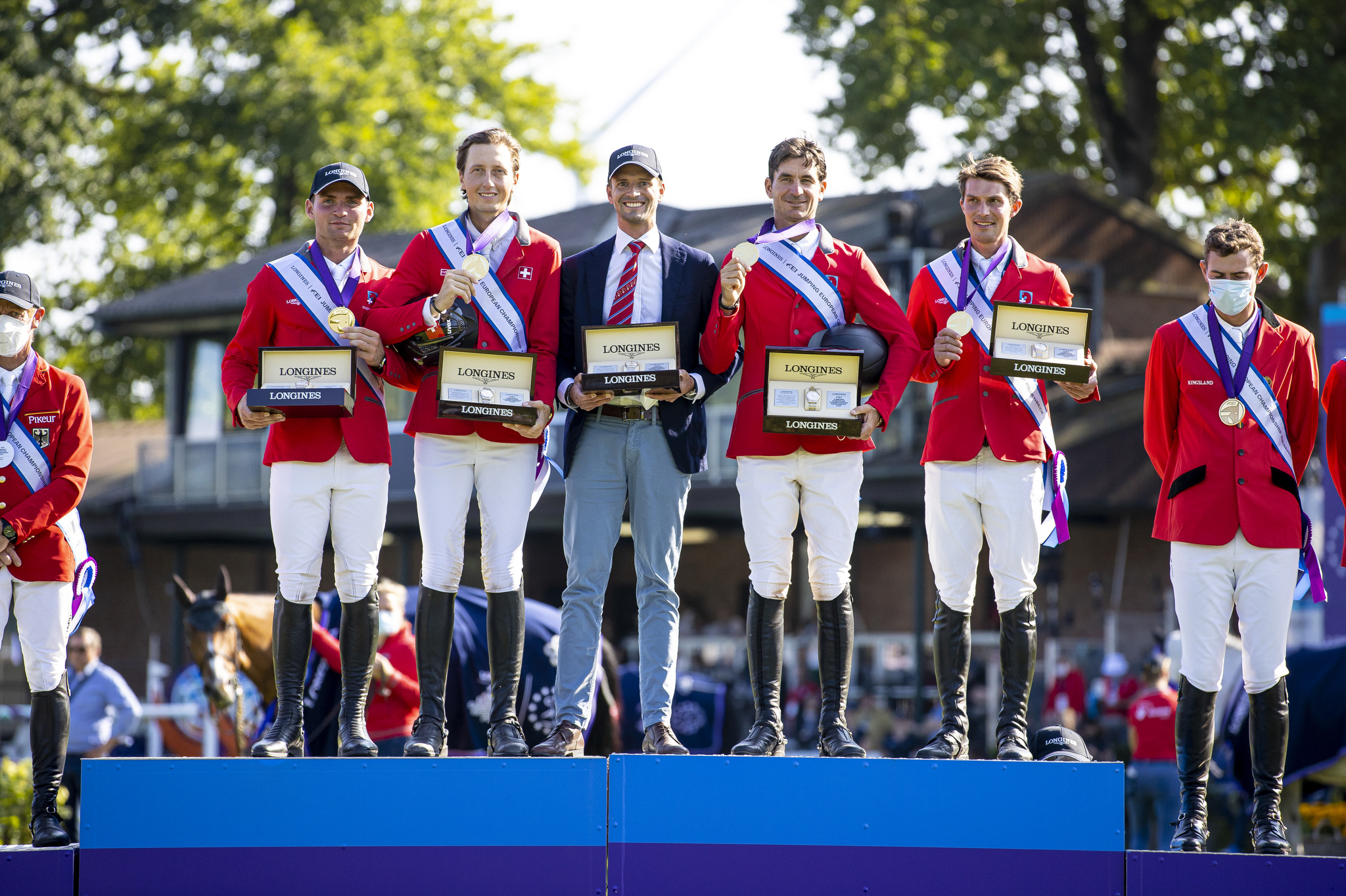 The Swiss stole the show when grabbing Team gold at the Longines FEI Jumping European Championships 2021 in Riesenbeck, Germany today. The final round of the team competition was a breathtaking affair, with everything hanging in the balance to the very end when Germany had to settle for silver while the defending champions from Belgium leap-frogged Sweden to take the bronze.

Spectator numbers were limited due to pandemic restrictions, but the 2100 who watched from the grandstands were treated to an epic day of top sport. And they too showed great sporting spirit, cheering every horse-and-athlete combination that came into the ring.

As the action began there was no room for error, as less than a fence separated the leading Swiss from the chasing Germans while Team Sweden was only one fence further behind. The Swedes couldn’t hang on however when Peder Fredricson and Catch Me Not S were the only pair in their side to keep a clean sheet.

That opened the door for the Belgians who carried 17.34 points into today’s round and added absolutely nothing. All four team-members have qualified for Sunday’s top-25 Individual final, with Pieter Devos lying third with Jade vd Bisschop, Nicola Philippaerts in seventh with Katanga v/h Dingeshof, Jos Verlooy in 17th with Varoune and Olivier Philippaerts in 21st place with Le Blue Diamond v’t Ruytershof.

The real excitement today however was the intensity of the battle between Germany and Switzerland for gold. It came right down to the wire and, not for the first time, all the pressure fell on the shoulders of Swiss anchor, Steve Guerdat, who withstood that pressure to bring it home.

Today’s victory was the fifth for Switzerland in the 46-year history of the FEI Jumping European Championships and the first since 2009. But it wouldn’t be easily won.

The Swiss effort kicked off with a 12-fault result for Elian Baumann and Campari Z who lowered the last element of the Longines triple combination at fence six, the oxer near the arena entrance at fence 11 and the first element of the penultimate double of uprights.

So when both Andre Thieme with DSP Chakaria and Marcus Ehning and Stargold jumped clear, then the title seemed to be slipping away from the overnight leaders and into Germany’s grasp. But youngest Swiss team member, 24-year-old Bryan Balsiger, held his nerve to bring AK’s Courage through the finish with a zero on the scoreboard, and when compatriot and defending individual champion, Martin Fuchs, did likewise with Leone Jei then things were looking a little more optimistic for the eventual winners.

By now Germany’s Christian Kukuk and Mumbai had faulted at the triple combination, so when David Will made it all the way to the penultimate double only to fault at the first element there with C Vier, then one of those two errors had to be counted so the German team tally had risen to 12.77.

That gave Swiss anchorman Guerdat a fence in hand, but he was hoping he didn’t need it. However that bogey triple combination played it’s part once again. He made it safely through, but Albfuehren’s Maddox got all fired up going down the line that followed it and when they turned to the oxer at fence nine the stride just didn’t come up right. With four faults now on the board they still had five obstacles to clear before the finish. Another error and the game would be over and it would be Germany in gold medal spot.

Guerdat’s impressive European Championship record includes team bronze in 2003, team silver in 2005, team gold in 2009 and team bronze in both 2015 and 2017. When it comes to team competition the London 2012 Olympic champions is rock-solid reliable, and today he brought it home once again.

He insisted afterwards that today’s win was very definitely not all about him. “I had pressure but no more than my colleagues here. Bryan did an unbelievable job to get us back in the race after Elian today was not as good as we expected, although he’s been amazing the first two rounds. That’s the thing, everyone wants to fight not just for himself but for the whole team, there is a great atmosphere in the team. I think it makes you strong when you fight for four and not just for yourself”, Guerdat said.

For Martin Fuchs there was another reason that today’s win was extra special. He was following in the footsteps of his father, Thomas, who was on the first Swiss team to win the title back in 1983 at Hickstead, Great Britain.

“It’s a huge moment for myself and my career to win alongside three friends and after my dad some years ago. It is great to bring another gold medal back to the family. It is amazing to have his knowledge with us and his precious advice as Swiss team trainer. I am so lucky to be able to do all this with him!”, said Fuchs who goes into Sunday’s Individual Final in pole position.

Meanwhile the German team reflected on their silver medal result. Marcus Ehning was happy because he was keeping a promise to his son, Lyas. “Today is his birthday and I told him I was going to bring him a medal!”, said the man who has been at the heart of German showjumping for many years and who is lying 14th with Stargold going into the Individual medal-decider.

Andre Thieme lies second in the Individual rankings and was thrilled with his silver medal today. “It is everybody’s dream to ride a big championship in front of his home crowd!”, he said.

David Will insisted his four faults today were “a rider’s mistake, I did not have the perfect distance and it is a shame as my horse jumped very well”, but he was still delighted with his silver medal. Christian Kukuk is pleased to be lying eighth individually with the fabulous grey stallion Mumbai.

“The last two days everything went exactly how I wanted, but today I made it just a little too difficult for Mumbai at the last double. But he’s still only nine years old and the way he finished the course made me very proud of him. We are looking forward to Sunday!”, he said.

So is Belgium’s Pieter Devos who is lying third with the lovely mare Jade. It’s only a few weeks since he stood on the bronze medal step of the podium at the Tokyo 2020 Olympic Games following a great performance with another of his string of horses.

“It is Jade’s first championship and she gives me a lot of confidence for Sunday”, he said. His Chef d’Equipe, Peter Weinberg, celebrated his team’s result today.

“We didn’t want to use the same horses who jumped the Olympics – all our horses are competing in their first championship here. Today when we walked the course we saw it was a step bigger, so ending the day with four clears, team bronze and all riders qualified for the final on Sunday – now that makes me very proud!”, he said.