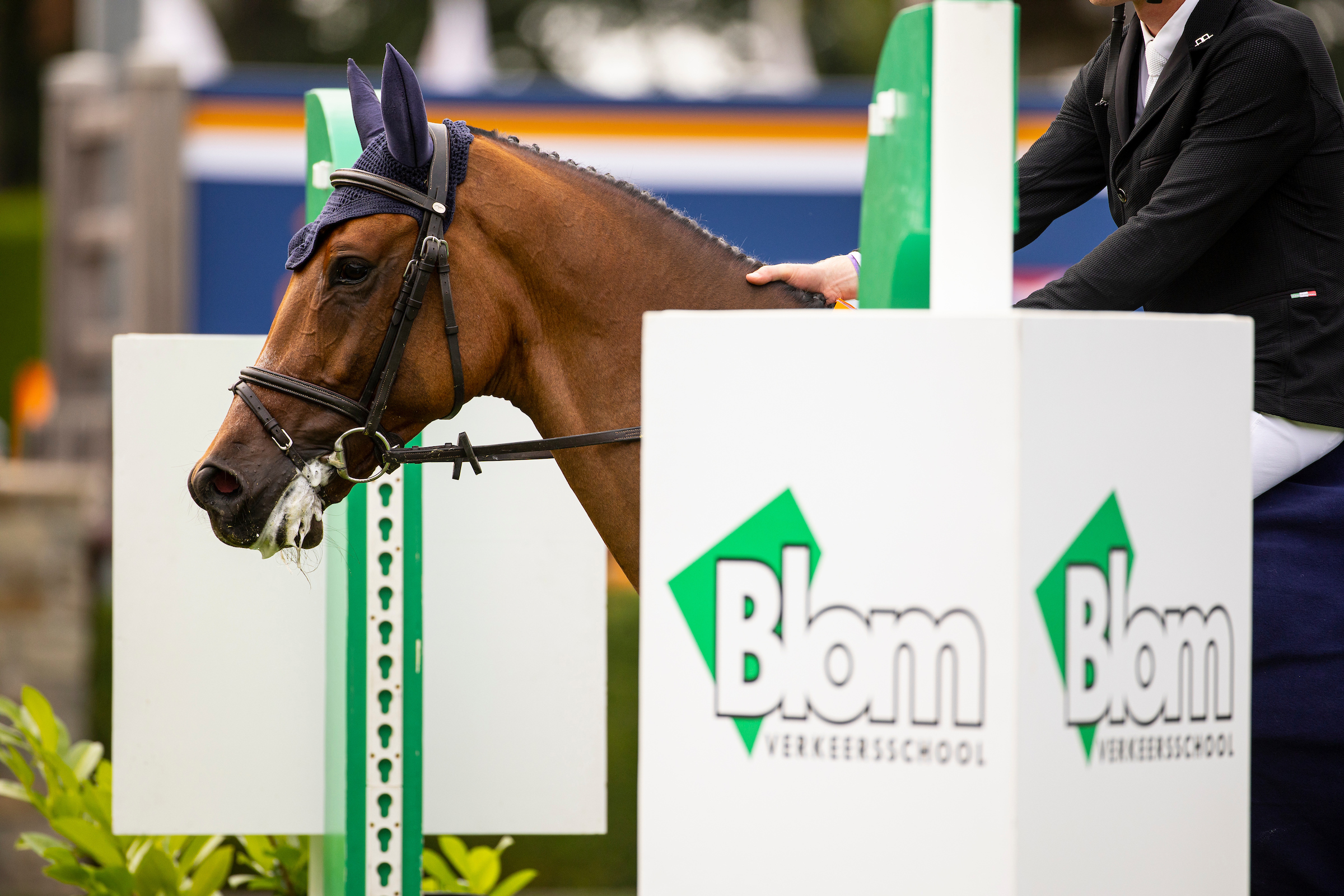 After an exciting three days of competition, on Wednesday the most talented KWPN youngsters put all their efforts into four thrilling finals to decide on this year’s KWPN Young Horse Champions. Nina Quite won the four-year-old class, Mister SFN ended up on top in the five-year-olds, VDL Lightfeet was the best six-year-old and Keep it Cool SSS won the championship title for seven-year-olds.

Four-year-olds: three mares on the podium

In the morning, the Blom Cup Finals have kicked off with the four-year-old class. Megan Laseur piloted the Andiamo de Semilly-daughter Nina Quite to the title. The jury, composed of Marc van Dijck and Bart Henstra, was tasked with assigning each of the 25 finalists two marks, one for rideability and one for jumping. Additionally, they provided explanatory comments. Several horses were awarded a 9 and the entire top three was filled with mares.

Scoring a 9.5 for jumping and an 8.2 for rideability, Nina Quite (Andiamo Semilly out ofCecampione elite IBOP-spr sport-spr PROK by Quite Capitol) was a well-deserved winner. She was ridden by Megan Laseur and is bred by Cor and Margriet Kuin of Lepelstraat. “This mare possesses a great canter, very quick reflexes, and a superb technique. A very talented jumper horse that meets all the requirements”, said Bart Henstra. The top layer of the class was of incredible quality. Runner-up Lourdes elite EPTM-spr D-OC (Catch out of Escada van Cachas) of Marco Zeekaf, ridden by Sanne Bergs-Olsson was another prime example. This mare had previously been one of the highlights of the mare test, which she passed with 80 points. “This mare shows great rideability and a scopey canter with a powerful push. She jumps with a good technique and lots of athletic ability.”

Lourdes was awarded two 9s. Receiving a 9 and an 8.9, it was also a good day for Stephanie Whitworth and Stal Hendrix’s keur mare Notate JDV (Jacadello out of Hantate stb-ext PROK by Lamm de Fetan, bred by Jean Dresen ofValkensburg). Yesterday, the pair placed second in the semi-final, today they took the third step of the podium in the final. “This mare has so much scope and even though she is slightly horizontal in her balance, she always jumps with a great technique. Certainly, a horse for the future!”, commented Marc van Dijck.

In Valkenswaard it was the Grandorado TN-son Mister SFN that triumphed in the hotly contested Blom Cup final. Ridden by Hessel Hoekstra he outstripped 24 combinations in the jump-off. Out of the 40 combinations that made their appearance in today’s final, 25 qualified for the jump-off. In the quest for a podium place and coveted invitation to Lanaken a fast pace was of the essence and that resulted in a conclusion full of thrills and spills.

Hessel Hoekstra skillfully directed his Mister SFN (studbook name Manana Manana van de Reesterhof, Grandorado TN out of Valery ster pref prest PROK by Haarlem, bred by Ton Lautenschutz of Ruurlo) to another exceptional clear round as the two emerged as winners. The Blom Cup has always offered an interesting opportunity to compare a horse to its peers and this achievement confirms that Mister SFN completely complies with the mission statement of the Springpaardenfonds. “Mister SFN shows so much quality and is getting better by the day!”, reacts a joyful Hessel Hoekstra. Ruben Dario Ramirez held on to the lead for a long time, but eventually had to settle for the second place. His Maximus Quantum Leap (Carrera VDL out ofBolette TH ster PROK by Indoctro, bred by K.B. Huygen of Eemdijk) was sold to Auke de Jong and Petra Strikwerda at the KWPN Online Foal Auction.

“I am very pleased! My most important task was making sure he would stay relaxed, because then he gets in the flow and you have to do very little”, explains the rider. Coming in third was Murosa (Zambesi out of Furosa keur sport-spr by Namelus R, bred by T. Verberk of Oploo) and Maxime Thefenne. The best mare produced a lightning-fast jump-off. The best five-year-old stallion was Mindset ES (Aganix du Seigneur out of Hosanne ES keur sport-spr pref by Kannan, bred by and registered to Egbert Schep), ridden by Jarno van Erp he claimed the fifth position. The stallion did not come near any rails as he showcased his impressive canter and ditto jumping skills. The ten best combinations have earned a ticket to the World Championships in Lanaken.

During the Blom Cup final for six-year-olds the audience was treated to beautiful sport. Alex Gill produced the fastest clear round aboard VDL Lightfeet, bred by Geert van der Meer. Nine combinations advanced to the jump-off, for which Louis Konickx had designed a demanding course. The twelve best horses have earned an invitation to the WC of Lanaken, the exception being the KWPN-approved stallion Lambada Shake AG (Aganix du Seigneur out Grappa AG bySpartacus, breeder Alex Gisbertz), that is registered abroad. Ridden by Pieter Keunen, the stallion jumped three clear rounds to rank 5th in the overall standings.

The best result was obtained by Alex Gill and the Arezzo VDL-offspring VDL Lightfeet (out of Horsinaa keur sport-spr by Indoctro, bred by Geert van der Meer) of VDL Stud, that was produced by Nella Bijlsma. “It’s great when a plan comes together! That’s not always the case so we are very pleased. VDL Lightfeet has abundant quality, and it is thanks to the great schooling of Nella we already get to celebrate such a victory”, responds the rider of VDL Stud. Runner-up was the scopey Quickly de Kreisker-daughter Liverma (out of Verma W by Kojak). Johan Klein Zieverink campaigns this horse for her breeder, Jos van Deurzen of Stal Keizersberg. They were the second entry in the jump-off and immediately put their rivals under pressure through a fast, clear ride. Alex Gill and VDL Lightfeet were the only ones to best them. The third step on the podium was claimed by the Etoulon VDL-son Legend D (out of Eurostar PROK by Eurocommerce Dubai, breeder H.J.M. van Dartel of Wijhe), that garnered attention with his technique and bascule. Lennard de Boer steered the bay to a double clear in this serious 1.35m course.

Last year he came very close, but this year he sealed the deal. Ridden by Michael Greeve, the Zirocco Blue VDL-son Keep it Cool SSS seized the win in the Blom Cup for seven-year-old horses. The 1.45m course designed for the seven-year-old horses in the main ring of Tops International Arena was a serious warming-up for the World Championship in Lanaken. Well, for the nine best horses to be exact, as their accomplishment was rewarded with a ticket to the prestigious event.

Only three combinations crossed the finish line without incurring any penalties. Both the technical lines and the limited time allowed played a key role. Three combinations cleared the course but saw one time penalty pop up on the scoreboard and although that barred them from entering the jump-off, it ensured qualification for the WC. In the jump-off, the final battle was one between winner Keep it Cool SSS (Zirocco Blue VDL out of Wyoming-S elite EPTM-spr sport-spr PROK by Corland, breeder Eddy Schoonhoven of Schoonrewoerd) of Gert-Jan van de Pol of Nieuw-Heeten, Bas Moerings aboard homebred Kivinia (I’m Special de Muze out of Favinia ster sport-spr PROK by Calido I) and Kapitaal L (Cornet Obolensky out of Fenomenaal by Comme d’Api vd Hacienda Z, bred by and registered to Johan Laseur) ridden by Megan Laseur. Breeder Eddy Schoonhoven was present in Valkenswaard to witness Keep it Cool SSS win the title and accordingly, receive a breeders premium. “Fantastic! I have sold him as a foal at Foal Auction Dronten and always kept a close eye on his progress; recently they also performed well in Knokke. We have not been very lucky with his late dam in breeding, but she has produced some very good offspring and Keep it Cool SSS takes the biscuit.”