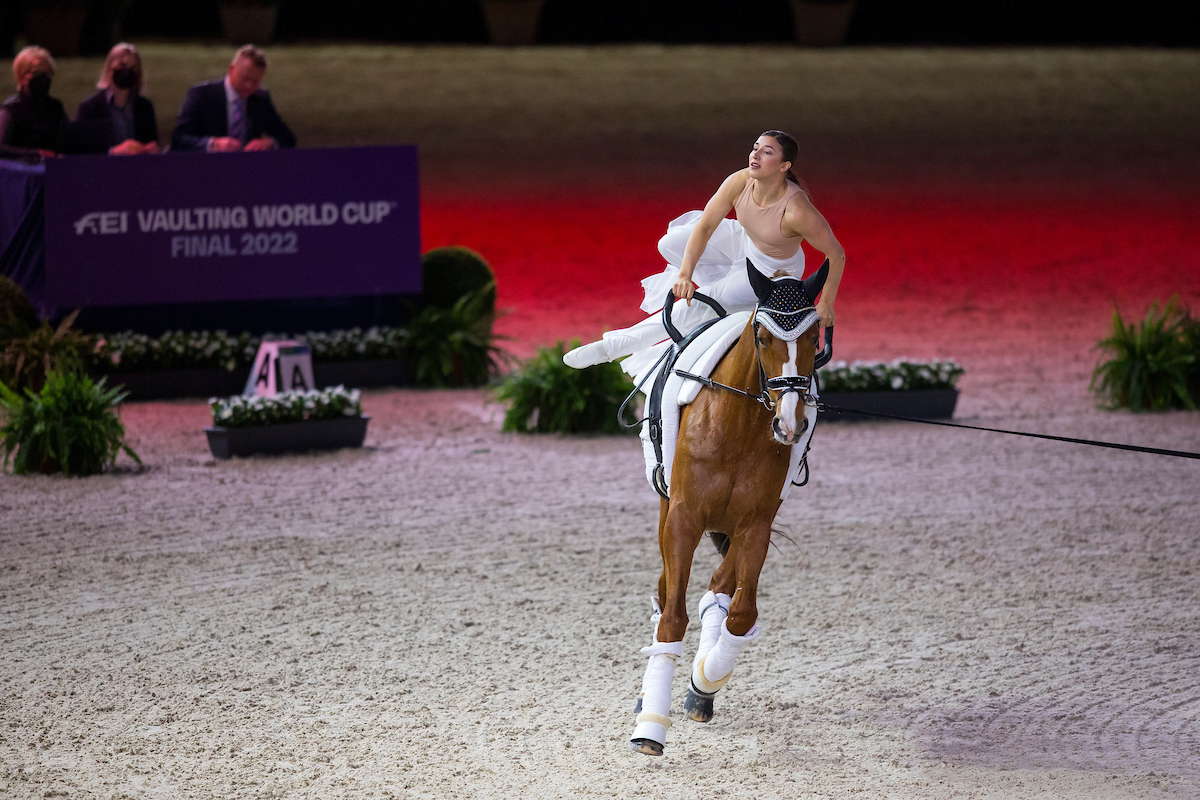 No less than three new champions were crowned at the FEI Vaulting World Cup™ Final presented by Hirmer Hospitality early Saturday afternoon at PARTNER PFERD, presented by Sparkasse Leipzig and Sparkassen-Finanzgruppe Sachsen. The magnificent mixture of elegance, acrobatics and harmony with the horse enchanted the visitors of the Leipzig fair. The victories went to France, Italy and Germany.

The It was a sweep for France’s Manon Moutinho in the women’s division of the FEI Vaulting World Cup™ Final presented by Hirmer Hospitality. Riding Saitiri and with her lunge handler Corinne Bosshard, she prevailed in both the technical score and the freestyle: “I am really happy and couldn’t have expected more – from my horse, my lunge handler and me. It was a great experience going into the 2022 season. We still have a few things to work on, but I’m very happy.” Second place went to Jannika Derks (Dormagen) with Rockemotion and lunge leader Nina Vorberg. Third place went to Kimberly Palmer (USA) with Rosenstolz and lunge handler Simone Aebi.

In the men’s competition, Italy’s Lorenzo Lupacchini triumphed. After finishing second in the technical program, he delivered the best performance of the trio in the freestyle with his horse Rosenstolz and lunge handler Laura Carnabuci. “I am really very happy and I didn’t expect this result,” Lupacchini beamed. “I competed mainly to enjoy this tournament. I had nothing to lose and I just tried not only to gymnastics but also to bring feeling across.” Second in the final standings of the FEI Vaulting World Cup™ Final presented by Hirmer Hospitality was France’s Lambert Leclezio with Saitiri and lunge leader Laura Carnabuci. Third place went to Jannik Heiland with Rockemotion and lunge handler Nina Vorberg.

In the Pas de Deux there was a very emotional victory for the German pair, Jannika Derks and Johannes Kay. The two end their careers with this triumph: “I would say we can walk out of here very satisfied,” Derks said happily. “It was a great atmosphere in the arena and that made this tournament very special for us, also because it is a completely different circle here than we know them. We achieved what we wanted to achieve: Have fun, enjoy the sport – it was the perfect tournament to finish our degree.”  And Johannes Kay was also beaming: “To have such a nice finish in such a great atmosphere – it doesn’t get any better than that!”