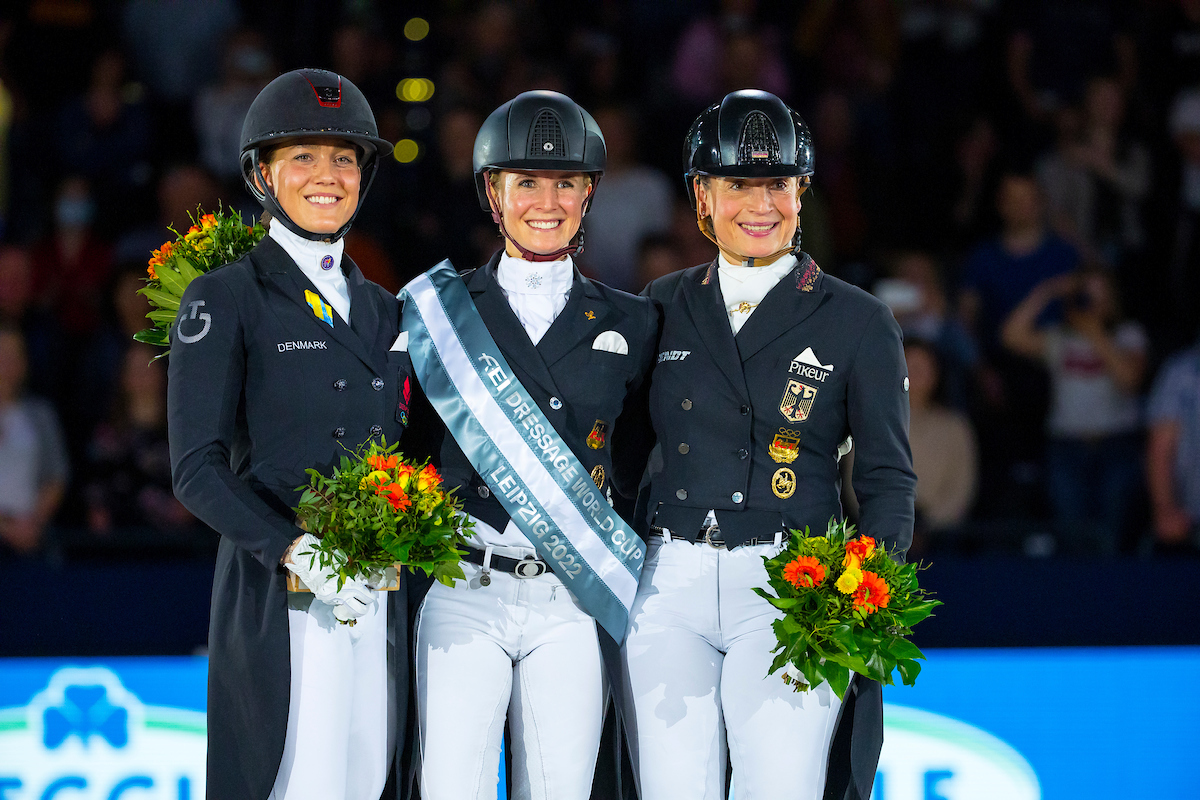 DigiShots was present to capture all the thrills and excitement, giving you an amazing throwback to last night, accompanied by the words of FEI’s Louise Parkes.

The Leipzig Messe was electric with excitement all night, and some of the equine stars shrank under the intensity of the noisy atmosphere during the first half of the competition. But when it came down to the wire the big names really rose to the occasion, and it was Denmark’s Cathrine Dufour who lined up second with her new young star Vamos Amigos while Werth and Weihegold finished third.

Werth raised the bar when putting a score of 85.921 on the board when fifth-last to go in the field of 17, Weihegold producing a stunning test that was full of energy and beautifully ridden by the lady long known as “The Queen” of dressage. The knowledgeable crowd were with them every step of the way, knowing that this was their last performance together as the mare was to be retired . And when they came to a halt, the crowd rose to their feet with an enormous roar to acknowledge them.

Team gold and individual silver at the Rio 2016 Olympic Games, European team gold in 2017, three FEI Dressage World Cup™ titles in a row including the last one in 2019 and team gold at last year’s European Championships in Hagen (GER) amongst their many achievements – their record has been extraordinary.

Denmark’s Nanna Skodborg Merrald followed with an impressive performance from the big-moving Atterupgaards Orthilia who posted 81.239 for second place temporarily and next in was her compatriot, Carina Cassøe Krüth whose ride on the light-footed, loose-limbed Heiline’s Danciera included fearlessly forward one-tempi changes. The crowd held their breath until the scoreboard showed 84.971 – Werth was still out in front.

However the last of the Danes had yet to come, and Cathrine Dufour always looked threatening when steering Vamos Amigo through a brilliant test, although clearly she wasn’t pushing the 10-year-old to the limit in extended canter. It was no wonder because, as she said afterwards, “he was a bomb today for sure!” He certainly looked explosive but contained himself to the very end and, once his rider relaxed the rein, wandered out the arena like he’d heard a crowd like today’s a million times. He certainly hasn’t though….

“He’s never been in a ring as full as this before, he was really brave today!”, Dufour said with delight this evening.

But the story certainly wasn’t over yet because the lady who has dominated the podiums at both the Tokyo 2020 Olympic Games and the European Championships last summer was yet to take her turn.

Crest of a wave

Jessica von Bredow-Werndl arrived in Leipzig for this week’s Final on the crest of a wave but, as she pointed out tonight, a little “rounder” than usual because she is expecting her second baby to arrive in a few months time. However the little bit of extra weight wasn’t bothering Dalera as the pair executed yet another exquisite test that demonstrated the delightful harmony between these two.

The balance, rhythm, accuracy and lightness, and the drama of their tempi changes all came together to present the loveliest picture, and as they pranced up the final centreline it was clear the result was done and dusted. When their score of 90.836 was announced the crowd erupted yet again.

Winner von Bredow-Werndl said afterwards, “I just wanted to come here and of course it was my goal to show what we have shown the last couple of months, but it couldn’t have been better to take a little break now and come back soon!”

Dufour joked that she shouldn’t rush returning to the sport after her baby arrives – “just stay away for a while!”, she suggested with an enormous laugh.

The Danes had every reason to be on a high tonight, Dufour filling second spot, Cassøe Krüth finishing fourth and Skodborg Merrald lining up in fifth place while Germany’s Helen Langehanenberg had to settle for sixth. It was a show of mighty strength from Denmark, and it’s a real shot-in-the-arm ahead of this summer’s World Dressage Championships on their home ground in Herning in four months’ time.

“It’s really fantastic to see how the system in Denmark has gone so well over last four or five years and you clearly see what has been produced – riders bringing young horses to the top – the two girls that are here are really cool and they can perform under pressure, myself included, and of course we love to put pressure on the girls sitting here!”, she said, looking at Werth and von Bredow-Werndl.

“But there is still some way to go, we saw that in 2020 suddenly things change, so for now we are going to keep the horses sharp, try to make a good plan and then really just enjoy that the Championship is going to be on Danish soil. That is quite fantastic in itself, and we are looking forward to inviting everyone for a great battle and great sport”, Dufour added.

Asked this evening about the Ukrainian flag she had pinned to her tailcoat, she explained, “There is an awful situation going on right now so I’m wearing it to show support to the people affected by this crazy war”. Newly-crowned champion, von Bredow-Werndl, leaned forward in agreement and added, “we all carry that flag in our hearts….”

After the prizegiving the emotions were flowing again when Werth and Weihegold entered the arena for the mare’s retirement ceremony. “When you are in a competition you are focused on that, and of course the last line (of their Freestyle) was also quite emotional and when they gave Weihe the standing ovation that was very great. But to go in with the team of people who have been around for the last seven or eight years that was really emotional, to feel the atmosphere”, Werth said. However she felt it was the perfect send-off in the end. “It was what you wish for a horse like her, to give her the last honour – it was just super!”, she added.

Meanwhile von Bredow-Werndl reflected on today’s success and the performance from Dalera that made it possible. “There are no words! She was phenomenal – she always leaves her heart for me in that square (in the arena) and it is not natural at all, and at the same time she does it again and again. I have the feeling even now that we are not yet at the end of our journey together!”, said the athlete who believes her mare has even more room for improvement, and who today became the sixth German athlete to win the coveted FEI Dressage World Cup™ trophy since the first Final took place back in 1986.