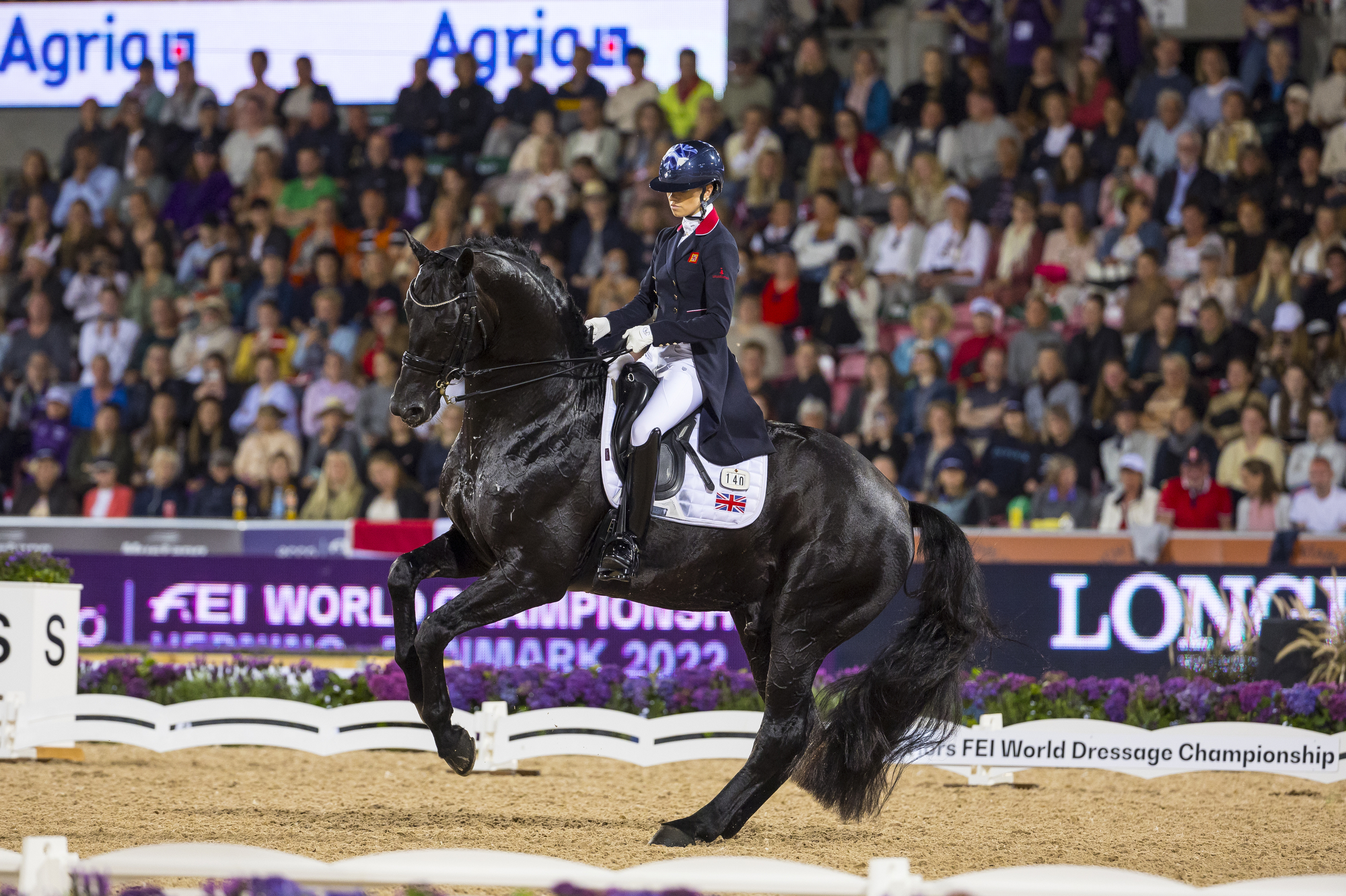 Stunned gasps all around the stadium, as Charlotte Fry’s stunning black stallion Glamourdale canters his heart out along the diagonal, with big hits blasting through the speakers. The pair sparkled under the floodlights and dazzled the judges. A very well deserved 90.654% on the scoreboard won the British pair their second gold medal of these championships in Herning, Denmark.

And what an exciting Wold Championships it has been thus far. On Monday evening Charlotte Fry and Glamourdale also managed to snatch the gold medal during the Grand Prix Special. They beat silver medal winning Cathrine Laudrup-Dufour and Vamos Amigos in an incredibly tight battle. Dinja van Liere and Hermès grabbed bronze.

That result was copied on Wednesday night, but the competition wasn’t any less thrilling. The upbeat tunes, enthusiastic sold-out stadium and the sparkling floodlights added a whole lot of atmosphere, making it a highly entertaining show to watch. As Charlotte Fry said to the FEI:

“We were both enjoying ourselves tonight, even the crowd was singing along to our music. It is really hard to believe it actually has happened, but everything with Glamourdale is nothing short of amazing. He has had this music at stallion shows growing up, so he always dances to it. When the crowd joined in and sang, Glamourdale just loved it.”

Bronze medalist (86.900%) Dinja van Liere was equally amazed, yet she managed to keep her cool during her Freestyle: “I felt no pressure tonight, I already got a medal so I just tried to ride the best freestyle I can. I thought it’s possible to get the third spot but I’m just very proud of him. He gets better and better. These Championships were unbelievable! Better than I’ve ever wished for.”

Home favourite and silver-winning Cathrine Laudrup-Dufour (89.411%) will be looking back at an amazing week in Herning, with an equally fabulous ending: “It was crazy good to enter the arena today with all the audience meeting us already when we passed through the entrance of the arena. I think we have had fantastic sport, what a medal podium we have. And, I really thrive under this kind of pressure, it just makes me better. This championship has been good for Denmark and our sport, such a fantastic meeting.”