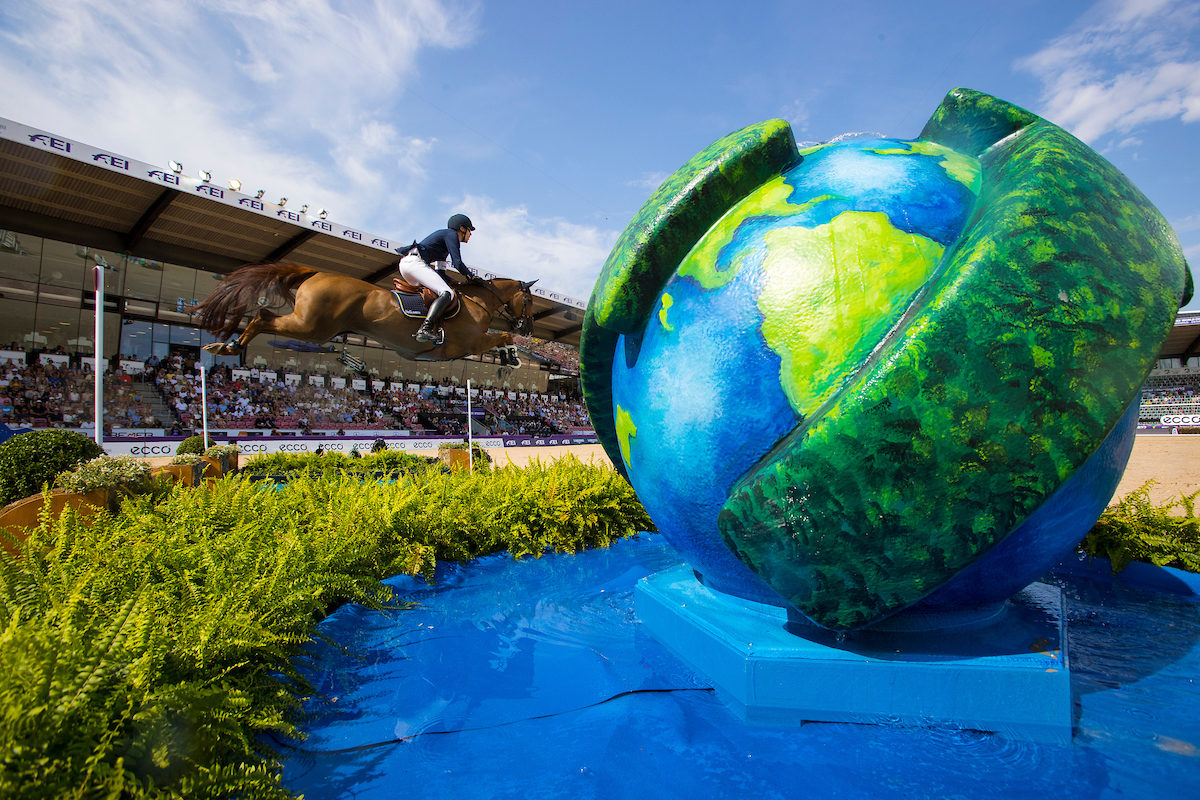 Yesterday afternoon, the Swedish number one jumping athlete in the world, Henrik von Eckermann, won the individual gold medal at the FEI World Championships in Herning, riding his astonishing chestnut gelding King Edward. It was the second gold medal for Sweden, as Henrik’s win followed up his nation’s victory in the team competition on Friday.

Von Eckermann certainly wasn’t on is own fighting for the gold. The Stutteri Ask Stadium was packed to the brim with yellow-and-blue adorned fans. You’d almost think the championships were held in Sweden, if it wasn’t for the wonderful iconic Danish jumps that made up Louis Konickx’s challenging course.

Round one of the final championship welcomed twenty-one horses and riders, the very best of the over 100 combinations that started on Wednesday. The final twelve jumped a second round, to determine the podium. Scores from all three days were carried forward, with the pairs starting in reverse order of their standings.

After the first round, nothing had changed with the top three, but a few hopes were dashed when athletes weren’t able to advance to the ultimate 12 after a flurry of clear rides. No less than five current or former world number 1-ranked riders would be jumping in the final rotation on a fresh, undoubtedly tricky course. As well as fatigue and nerves, the FEI’s new time rule would play a role, burdening riders over the time allowed of 77 seconds with a point for each second over the limit. With a huge oxer as the final obstacle, anything could happen, and no one was promised a medal until the very last ride was complete.

Jumping sixth from last, Olympic bronze medalist Maikel van der Vleuten rode a gorgeous clear staying on his score of 5.96 points, putting pressure on the top five. After the award ceremony, Maikel said to the FEI: “Friday, I made a little rider mistake. My horse deserves the medal, and I had two amazing rounds. It gives pressure on the last riders with my two clear rounds – and the luck was on my side today.”

Jérôme Guery put in a textbook clean ride as well, not adding anything to his score of 3.35 points either. Guaranteed a medal, he was left to wonder what colour it would be, with only two duos left to jump, later finding out it was silver. With that, the Belgian’s dream certainly came true: “It feels amazing. My horse deserves it, it is nice to bring a medal home. It means a lot to get an individual medal, but my team deserved to get one too. The Swedish are amazing, and we knew it before we came here. My dream to come back with a medal came true. We have a fantastic team here and my horse has developed so nicely to a new level since the Olympics and was really fantastic.”

Henrik von Eckermann and the Belgian Warmblood King Edward were last to enter the ring and to decide the awards ceremony. Riding the chestnut gelding around the arena with the precision and keen judgement that made him the world’s top jumping rider, Henrik cleared the final oxer inside the time with no rails down and with that, winning gold.

Henrik: “It a fantastic feeling! I only concentrated on riding. The first round was super, second round as well. I needed to keep concentrating and I had a very good feeling, and I knew I could not afford a fault if I wanted the gold. I have prepared for this for so many years now and to receive this medal was fantastic. Even though it is still so easy to make mistakes, King Edward certainly is the world’s best horse”