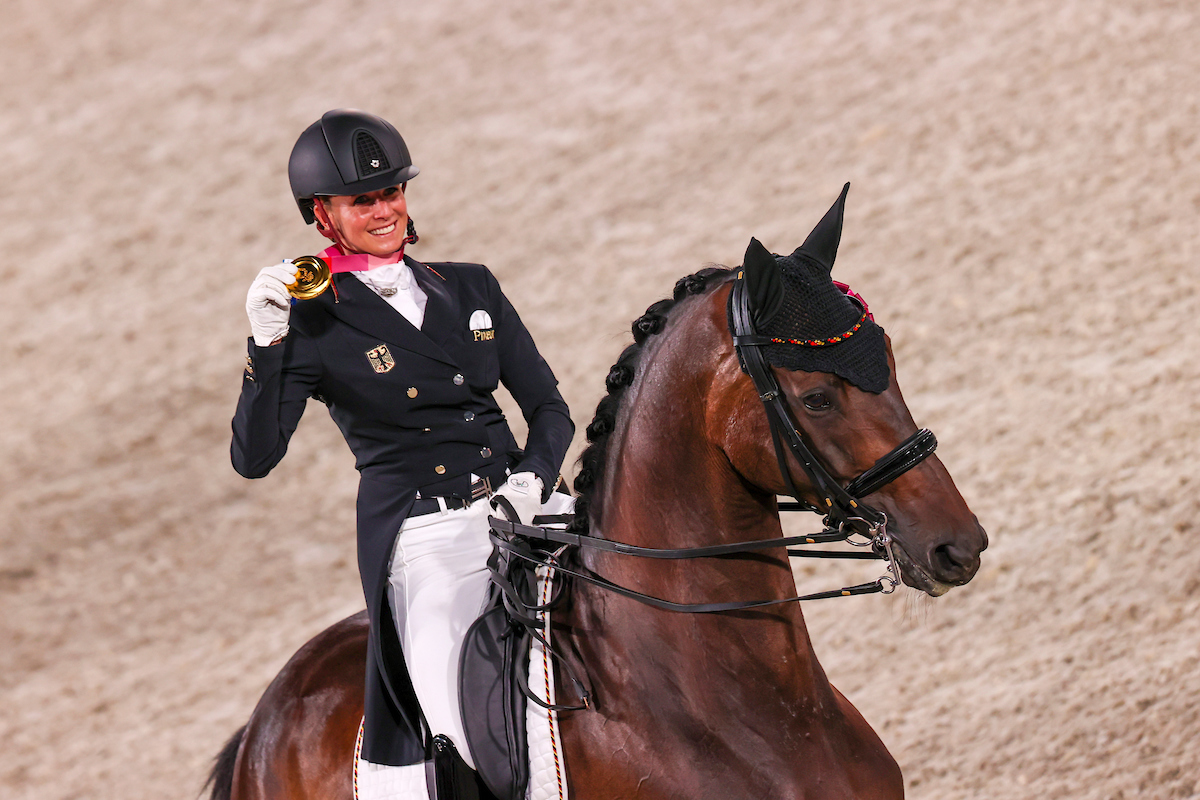 This beautiful, exciting day marked the grande finale for the Olympic dressage riders. With the Grand Prix Freestyle the exuberant fight for individual gold was on… and we were here to report to you live!

First to start was Brittany Fraser-Beaulieu and the Dutch-bred All In (v. Tango). The Canadian rider had placed 19th in the Grand Prix, just missing out on the individual finals, but was able to step in after the withdrawal of Adrienne Lyle (USA) and Salvino from the Freestyle. To the voice of Céline Dion Fraser-Beaulieu rode to 72,607% with an artistic score of 80,200%, coming to a total of 76,404%.

Up next was Nanna Skodborg Merrill for Denmark. With lots of willingness and souplesse of her Zack (v. Rousseau) she completed her Freestyle on a score of 80,898%. Riding four lovely pirouettes, of which two ridden out of some very neat lines of canter half pass, she scored especially high on her artistic floor plan.

Steffen Peters (USA) and Suppenkasper (v. Spielberg) rode their kür to hip modern dance music. The combination seemed to have lost a bit of their sharpness in the beginning of their kür, yet showed an lovely energetic finish with some really funky lines of half pass, pirouette and piaffe, which suited the music perfectly. They scored 85,543% artistically and totaled a score of 80,893%.

Rodrigo Torres (POR) and the eleven year old Fogoso (v. Rico) put in a lovely kür to the bombastic sounds by Pink Floyd, which suited the personality of the impressive grey Lusitano stallion perfectly. Adding a sassy one handed line of one tempi’s and final passage, an incredibly proud Torres scored 78,943%, finishing his Tokyo adventure on a high.

Competing for Spain, Beatriz Ferrer-Salat and Elegance (v. Negro), rode their very first international Freestyle to some wonderful classical music by Verdi. Her KWPN-gelding showed a little tension, yet tried his very best to bring their score to 77,532%.

After winning team bronze in the special yesterday, Carl Hester and En Vogue (v. Jazz) was the first to enter the ring for Great-Britain. A lovely final zigzag half pass in passage brought their artistic score to 85,886%, totaling 81,818% taking the lead ahead of the first break.

It was Dutch rider Hans Peter Minderhoud that took us off right after the first break. Wearing his eyecatching orange tailcoat he rode his thirteen year old Vivaldi-son Dream Boy to a total score of 80,682%. It seemed the horse and rider have lost a bit of their wow-factor after yesterday’s demanding exercise, yet the soft, classic tunes suited the elegance of the black stallion perfectly. The combination excelled in their beautiful technical lines of half passes and passage and expressive extended gaits. They scored 75,536% technical and 85,829% artistically.

One of the spectator favourites of these Olympics, Sabine Schut-Kery (USA) and Sancho (v. San Remo) was op next. With just as much ease, relaxation and activity as they showed yesterday, the combination gave us a stunning kür that was both a treat to the eyes as it was to the ears. To the gorgeous music of Hans Zimmer’s The Last Samurai, the combination earned a well deserved artistic score of 88,457% and a technical score of 80,143%. They ended up with a total of 84,300, taking the lead.

Well, we’ll certainly remember her name. To a musical remix with tunes from Fame and Footloose, Carina Cassie Kruth showed the talent of her gorgeous ten year old mare Heiline’s Danciera (v. Fuerstenball OLD) once more. Responding beautifully to her rider, the mare showed us a gorgeous Freestyle scoring 83,329% going into second place.

With great enjoyment Therese Nilshagen rode a lovely expressive kür for Sweden with the fourteen year old Dante Weltino OLD (v. Danone 4). They scored a total of 79,721%, with a technical score of 74,500% and an artistically valuation of 84,943%.

Swedish team mate Juliette Ramel followed soon after. With the fifteen year old KWPN-gelding Buriel K.H. (v. Osmium) Ramel gave us plenty of lines of passage and some lovely active pirouettes. They came to a total of 79,721%, going into seventh place.

Riding the big and powerful, yet elegant KWPN-stallion Everdale (v. Lord Leatherdale) a proud Charlotte Fry scored 80,614% for Great Britain. After this wonderful kür and winning the bronze team medal yesterday, Charlotte can look back on an amazing Olympic debut.

With her impressive eleven year old chestnut gelding Bohemian (v. Bordeaux 28), Cathrine Dufour (DEN) lead the final group of six of the worlds best dressage riders. The dramatic, gorgeous music of the musical Les Miserables accompanied Dufour’s kür absolutely beautifully. With all the ease and elegance Bohemian danced through the Tokyo ring with as much energy as he did on the very first day. The timed their technically difficult lines of extended canter to pirouette and passage into half pass beautifully. They scored an amazing 93,086% artistic score and a 81,929% technical score, coming to a total of 87,507%. With that percentage, the combination takes the lead.

Can she do it again? After winning both the Grand Prix and scoring highest in the Grand Prix Special, all eyes are on Jessica von Bredow-Werndl. Riding her infamous La La Land-kür (a personal favorite of your reporter) she scored 91,732% with her mare TSF Dalera (v. Easy Game). The music accompanied the combination beautifully, hitting every note with each and every piaffe, passage, pirouette, half pass, lead change and extension perfectly. With a technical score of 85,893% and an artistic score of 97,571%, the German combination put the bar very, very high.

Pulling on everyone’s heartstrings, Edward Gal (NED) rode his Total US to the very same kür as he did the stallion’s father Totilas. With a lot of activity, bounciness and spring Gal and the only nine year old black stallion to 84,157% and a current fourth place.

With all the grace, elegance and correctness imaginable Isabell Werth (GER) rode an absolutely amazing kür with her already seventeen year old Bella Rose 2 (v. Belissimo). The proud chestnut mare went through fire riding a wonderful, faultless test. She put everyone on the edges of their seats when the score of 89,657% came in… settling below a Bredow-Werndl’s spectacular score.

The much loved little Gio (v. Apache) and Charlotte Dujardin (GBR) came to a score of 88,543%. An absolute joy to watch, the pair showed so much power, elegance and willingness. Their wonderful test scored 83,000% technically and 94,086% artistically, winning the lovely pair a bronze medal.

Last to enter the ring was Dorothee Schneider and Showtime FRH (v. Sandro Hit). Unfortunately it wasn’t meant to be this time around for the German combination, scoring just 79,432% and ending in a rather disappointing 15th place.