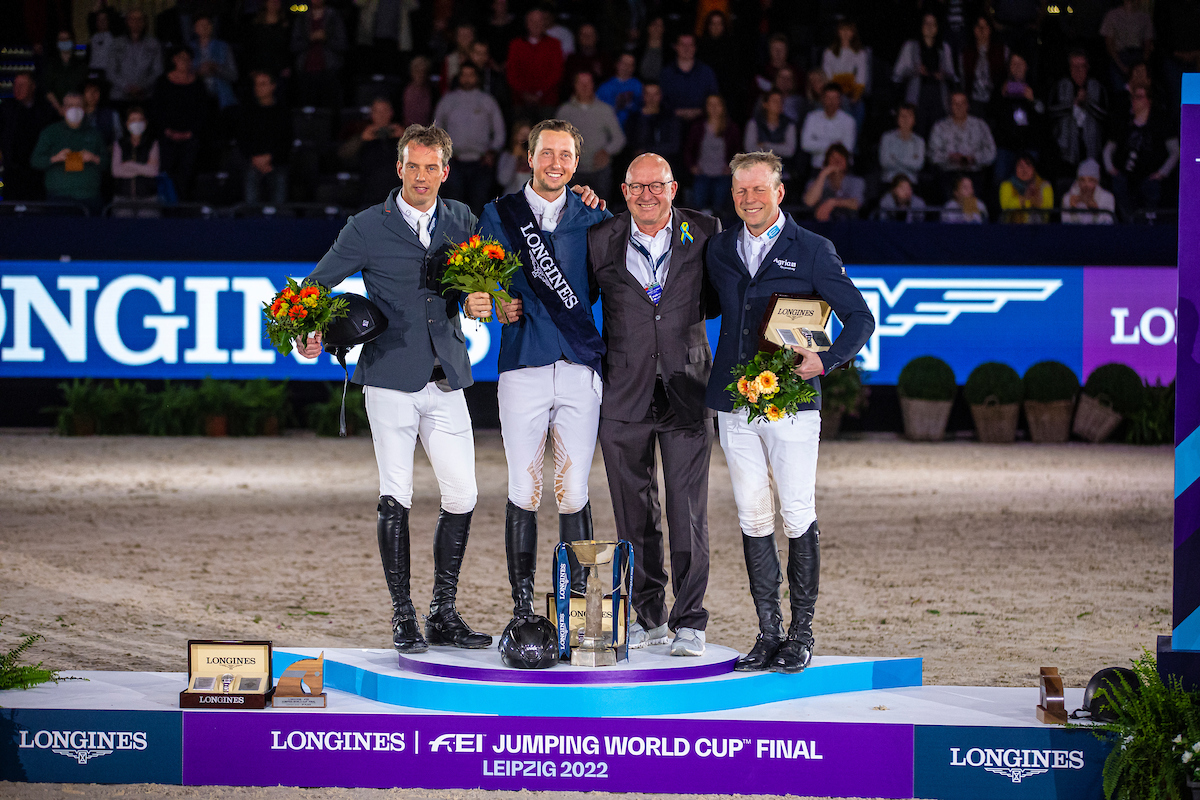 Martin Fuchs and his fifteen-year-old KWPN-stallion Chaplin (s. Verdi TN) have won the Longines FEI Jumping World Cup championship this afternoon in Leipzig, beating a field of 35 athletes, including defending champion Steve Guerdat. Credits go to Fuchs’ other GP-horse The Sinner (s. Sanvaro) too, whom he rode on day two of the competition: an unique strategy that clearly paid off well.

After a tough but thrilling three days of jumping, Fuchs finished on a total of 5 penalty points. Second place went to Harrie Smolders and Monaco (s. Cassini II) and third went to the Swede Jens Fredricson and Markan Cosmopolit (s. Cohiba 1198).

Fuchs: “After having the rail down on Friday I wasn’t too sure riding two horses was the best strategy. But then as I was still sitting third, I planned that two clear rounds with Chaplin would still secure me a place on the podium. But then winning this prestigious, historical event truly became a dream come true. Adding my name to the list of great riders on this trophy is fantastic.”

Going into the final day of competition, Dutchman Harrie Smolders and Monaco were in the lead having accumulated just 4 penalty points after the first two days of competition. Even though putting in a wonderful clear round in the first part of the finale, an unfortunate fault in the triple during the second round took away his chance of the win, coming to a total score of 8 penalties.

Smolders: “Even with second place I’m very pleased. It’s Monaco’s first big championship. I know he can do brilliant at the big competitions such as Den Bosch and Geneva, but jumping at this level for three days in a row, is a whole different story.”

Jens Fredricson put in a double clear this afternoon too, finishing on an equal score to Smolders, albeit completing the final round a little slower: 62.35 seconds against 61.99 seconds. A smiling Fredericson: “I’ve really enjoyed the championships. I’ve got a really good horse and I’m in good shape. After having had quite a few good competitions ahead of the Finals, I actually had great expectations coming here.” Fredricson jokingly added: “You know, I expected to win, as I always do.”

“I really enjoyed ever second: normally get to watch this on the television at home, but now getting to ride here, with all these people, is amazing. It’s fantastic to be here and then doing what I’ve done…”, Fredricson says proudly.