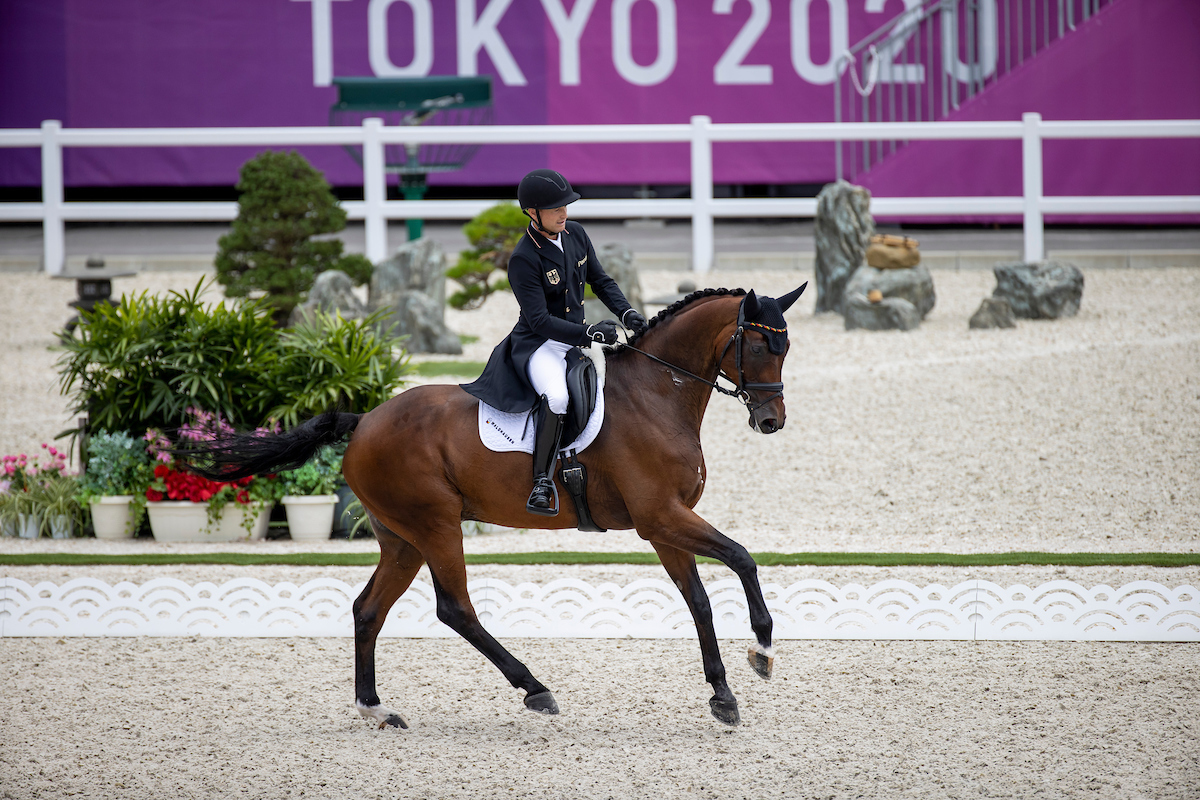 Reining Olympic gold medalist Michael Jung (GER) will be leading the way into tonight’s Olympic cross country. The event will take place at the Sea Forest Cross Country Course from 00:45 to 04:30 CET and can be followed live through Discovery Plus.

After finishing the dressage with 21,10 penalty points, the two-time individual Olympic gold medalist and his thirteen-year old Chipmunk FRH (v. Contendro I) are holding onto first place. The combination will start their cross country as number 60 on the list of 61.

Oliver Townend for Great Britain is in place two with 23,60 points. He’s riding the Irish Sporthorse stallion Ballaghmor Class (v. Courage II) and will start second tonight. Alex Hua Tian (CHN) is currently holding onto third, riding his Don Geniro (v. Don Kennedy) to 23,90 points in dressage. The Chinese combination also competed at the Olympic games in Rio. They start as number 7. Julia Krajewski (GER) is in fourth place with Amande De B’Neville and Tim Price for New Zealand is in place five with Vitali.

As for the team competition, Great Britain is currently taking the lead going into the cross country. The team currently stands at a total of 78,30 penalty points. With the new format of having three riders compete for the team and without the possibility of getting to strikethrough, Oliver Townend with Ballaghmor Class, Laura Collett with London 52 and Tom McEwen with Toledo de Kerser, will have to put in joint effort to hold onto that possible gold team medal.

Germany, with Julia Krajewski and Amande De B’Neville, Sandra Auffarth with Viamant du Matz and Michael Jung and Chupmunk FRH in their team, is currently in second place with 80,40 points. In third place ahead of the cross country is New Zealand, with Jonelle Price and Grovine de Reve, Jesse Campbell with Diachello and Tim Price with Vitali. The team scored a total of 86,40 points.

With Lara de Liedekerke-Meier having to withdraw her horse Alpaga D’Arville because of a small injury, the participation of Belgium in this year’s Olympic eventing has unfortunately come to an early end. The combination was in 48th place in the overall ranking, after scoring 37,20 in the dressage.

As for the Netherlands, Merel Blom and The Quizmaster (V. Albaran XX) will start their eventing in 21st place, scoring 31,50 penalty points in their dressage test. Janneke Boonzaaijer and ACSI Champ de Tailleur (v. Quidam de Revel) are in 30th place with 33 points. Boonzaaijer will start as number 41, followed closely by Blom in number 44.

As you might have sensed: neither of the two countries have been qualified to compete towards the team medals.

Age is just a number

Another combination that you might want to keep an eye on during the cross country is Thomas Heffernan with Tayberry, start number 21. With 46,70 penalty points they’re currently holding onto 61st place. Although they won’t come anywhere near the medals, they very much deserve some extra cheering on. Heffernan is the first ever Hong Kong event rider to qualify for the Olympic Games, which he did so in the saddle of a very special little horse. The stallion, only measuring 1,55 meters, is already twenty-years-old! The son of Feridoon out of a Kimball dam is owned by Irene Ho and Miranda Rauis and competed at 4*-level in his younger years. An inexperienced Heffernan started riding Tayberry in 2015 and together they worked their way all the way (back) up to where they’re now: the Tokyo Olympics. Quite a remarkable effort from them both, don’t you think?

Both Tayberry and Hoy clearly prove that age is just a number, even in one of the most demanding equestrian disciplines imaginable!

Here’s a link to all the dressage results and you’ll be able to find the complete startlist for tonight’s cross country over here.

Eventing at the 2020 Tokyo Olympics: First dressage results are in
Oliver Townend takes the lead after thrilling Tokyo cross country